Caging
When the slave is locked in a cage for all or part of the session. They can be teased by the Domme or left alone. Putting a slave on display in a cage is always fun, too!

A long, thin, flexible rod (or switch); usually made of varnished rattan, but can also be made of fiberglass, bamboo or plastic, used to whip a slave. Often considered a form of "Corporal Punishment."

Any action, surgical, chemical, or otherwise, by which an individual loses use of his testicles. Removing the testicles will cause sterilization and greatly reduce the production of testosterone.

A whip that has exactly nine strands that are usually braided with a knot at the tip for increased "sting".

When a Domme inflicts pain (from mild to intense) upon the slave's genitals. Some items that can be used are: clamps, clothespins, rubber bands, weights, rope, paddle, spatula. The Domme could also bind the slaves balls in a sling or She could just kick Her slave in the balls.

CFNM (Clothed Female Nude Male)
This is a session with The Domme is in clothing (covering Her breasts and genitals, at a minimum), while the slave is completely naked.

Chastity / Key holding
This is a form of orgasm control and/or forced abstinence, through the use of a locked device over the slave's genitals. The Domme is the "Key holder" of the device and will decide when, or if, the slave gets to have sex or pleasure himself!

Chemical Play
A session involving the use of items like icy hot, salt, hot sauce, etc., on sensitive areas of the body. Sandpaper might be used first.

Cock Ring
A rubber or metal ring that fits around the base of the cock and the balls with the intent of prolonging an erection.

Coerced Bi
A session involving The Domme forcing the slave into participating in bisexual activity while the slave is pretending that they do not want to participate. {see also: Consensual/Non-Consent}

A device of any material worn around the neck used to indicate submissive status in a relationship. When The Domme "owns" Her slave, he is said to be Collared; a slave's symbol of commitment to his Mistress.

Consensual / Non-Consent
A session involving role play where the slave acts like they are not consenting to the activities involved, when, in reality, they fully consent.

Couples
A session including the Domme and two other people, usually husband/wife, but could be two submissives of the same sex.

Cross dressing / Sissification
A session involving the slave being dressed up in female clothing (a dress, panties, or bra), having makeup applied and fitted with a wig. When the slave is all dolled up, The Domme will teach him how to act like a proper lady.

Foot Fetish
A sexual obsession directed at The Domme's feet. The slave might kiss, rub, lick or suck on Her foot.

Role play in which the submissive dresses and acts like a living doll (often a rubber doll), and the Domme takes on the roll of the doll's owner.

​
Dom
A Male Dominant, A Master. One who enjoys assuming control.

Double Domme
A session involving two Dominatrices putting a slave in his place.

Edging
When a slave is brought to the brink of orgasm, but stops just short of releasing. The idea is that when the slave does finally release, it will be very intense.

Electrical Play
When The Domme applies electrical stimulation to any part of the slave's body, from mild to intense. {see also: TENS unit, Violet wand}

Emasculation / Degradation
The act of a slave being "broken" by his Mistress and then "molded" to fulfill Her every desire.

Exhibitionism
The act of becoming sexually aroused by exposing private body parts, usually to strangers, or by performing sexual activities in public view.

Extended / Overnight / Weekend Sessions
An extended session can be from 8-12 hours with no overnight. An overnight session could be the continuation of an extended session, or could be a session with the slave sleeping over and leaving first thing in the morning (after serving his Mistress breakfast, of course!). Weekend sessions are simply 2-4 days of continuous fun!

When a slave wants nothing more than to inhale the aroma of his Domme's farts.

Fetish
An obsession or fixation with an object or experience, usually essential for sexual arousal and gratification. (a shoe fetish, leg fetish, foot fetish, etc.)​

The practice of placing a piece of carved ginger root into the anus or vagina. The result is a burning sensation that some claim can intensify orgasm.  Can be used as a form of punishment in conjunction with spanking or caning.

Financial Domination
A session involving the slave showing his full dedication and devotion to serving his Mistress by releasing his assets over to Her.

Flogging
When The Domme strikes Her slave with an implement (called a flogger) often constructed of strips of leather, suede or rubber, to name a few.​​

Ball Gag
A type of gag used to cover the mouth to prevent the slave from talking or to muffle sound. A small ball is inserted into the mouth and secured with a strap that is wrapped around the lower part of the slave's head. {see also: Gag}

Bastinado / Caning
Most people consider this a severe form of punishment, probably because it will leave heavy marks and involve a high degree of pain. The slave presents the bottom of his bare feet to his Mistress so that She can whip them with Her cane. {see also: Cane, Impact play}

Begging
The act of asking for something with insistence and urgency <please, Maitresse, may I have another>

Bisexual
When someone is attracted to, and desires to be with, both male and female sex partners.

Biting
When a Domme uses Her teeth to grip, wound or pierce the skin of Her slave.

Blindfold
Any item that covers the slave's eyes and obscures his vision. {see also: sensory deprivation}

Body Worship / Ass Worship
A fetish involving a slave showing respect for his Mistress's body or a specific body part. Usually an obsession, complete admiration, shown by kissing, licking or sucking on the body part he is worshiping.

Bondage / Rope Bondage / Mummification / Predicament Bondage
The act of being tied up or wrapped to restrict mobility and prevent the slave from escaping. A few ways this might be accomplished are: rope, plastic wrap, tape, fabric, wrist straps, ankle straps, handcuffs. Many have made an art out of rope bondage.

Boot Worship
When a slave deeply admires the boots of his Mistress. He desires to kiss, lick, clean, and suck on Her heel, among other things.

Boy / boi
Boy generally refers to a submissive role with a Master or parent/child relationship. A boi is a young male who plays a feminine role, often wearing makeup and dressing in girl's clothing.

Branding / Cell Popping
Scarring a slave's skin with the use of a heated object. Can be semi-permanent; however, branding is usually permanent. Cell popping involves the use of a small metal poker, heated until it glows red, then applied to the skin for a very brief second, forming a design on the body that lasts anywhere from two weeks to six months.

​​Gender Play
To dress up and take on the role of the opposite sex in a scene. {see also: Cross dressing/Sissification}

Golden Shower
This would involve The Domme urinating on Her slave. Or, She could make him consume Her pee. 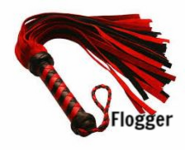 Hard Limit
An activity that is absolutely off limits, non-negotiable for the slave.

Hood
Wide range of coverings which totally encase the head, often made of leather or PVC. Some have openings for the eyes, nose and/or mouth.

Hypnosis
A condition in which The Domme places Her slave in a relaxed state of mind. She will then offer suggestions that will result in changes to his behavior and/or attitude.

Abandonment
A session involving role play that leaves the slave with the feeling of being left alone, undesired, insecure or discarded, by his Mistress. {see also: Role Play}

Age Play
A role play session gratifying a slave's fetish to be younger, or sometimes older, than their real age. Often acted out as Mommy/baby, Mommy/child, Teacher/student, Babysitter/baby or child. [see also: Infantilism]

Algophilia
When a sub is sexually aroused from experiencing pain.

Altocalciphilia
When a slave has a high heel fetish.

Animal Play
Animalism: A roll play session where the slave assumes the role of an animal. Popular rolls are: puppy, dog, cat and horse or pony.

Androgyny
Showing characteristics of both male and female.

​
Asphyxiation / Smothering/ Face sitting
This is where The Domme deprives the slave of air for a short period of time by blocking his mouth and nose. She can do this by using an object like a pillow, bag or towel. Or by sitting on the slaves face.

Autoclave
A professional sterilization device for equipment made out of metal.

​
Auto-erotic Asphyxiation
When a slave's breathing is controlled, or stopped, for a period of time with the intent of increasing pleasure, mainly during orgasm.{see also: asphyxiation} 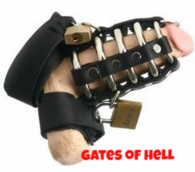 Impact play / Slapping
Play involving The Domme striking the slave with a toy or implement on any part of the slave's body; could also be done with a bare hand.

Japanese Bondage
Rope bondage in which the emphasis is on the artistic display rather than the utility.

Gag
Devices that are inserted in or cover the mouth to muffle sound.

Gates of Hell
This is a male chastity device consisting of 3 to 7 rings and a leather strap. The idea is to constrict the cock while it is erect, hence the name, Gates of Hell.​​